Plant a tree in memory of HARRY
An environmentally-friendly option 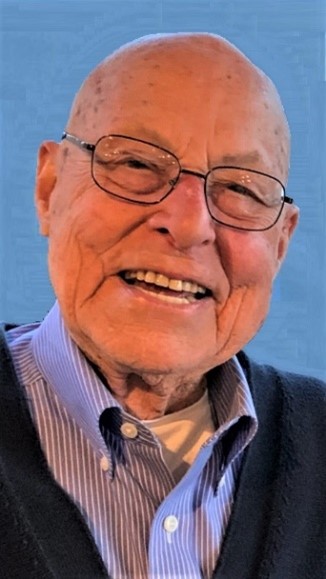 Harry Edward Lundblad quietly passed away May 9, 2021, at the age of 98.  Born October 19, 1922, in St. Paul, Minnesota, to the late Swedish immigrants Axel and Esther Lundblad, he was the fifth of seven children who all predeceased him.  He told stories of a poor but happy, adventure-filled childhood in the city with his siblings and friends like Swede, who was a Norwegian.

At age 15 he had a chance encounter in northern Minnesota with a beautiful teenager from Sweden.  Although he was instantly enchanted, she was not, and dismissed him as much too young because she was 17.  Dejected, he returned home, but did not forget the girl.  Fate tried to intervene because when he was 17 he met her again in Minneapolis, but this time she had a boyfriend.  Nonetheless, true love was not to be denied because when he was 18 he met her a third time and she agreed to a date.  The following year he married Elsa Anna Maria Dillner on April 4, 1942, so in 2021 they celebrated their 79th wedding anniversary.

When the United States entered World War II, he left Minnesota for the first time to serve in the U.S. Army Medical Corps in Italy and France.  It was there that he declared that if he survived, he wanted to wear a suit and tie and work in an office.  Following his return to the States, he started a career as an accountant with Cargill and worked for the firm in multiple locations until retiring in Arkansas at age 65.  Still energetic, he was a substitute teacher for a decade and then the couple relocated to Delaware to be closer to many of their children and grandchildren.

His integrity, loyalty and discipline were a source of inspiration for many.  His family was his highest priority and he would pray daily for each individual. They recall his many lessons about how life should be lived, including the rule to work hard – do the best you can in everything you do – then have fun.  Fond of saying, “It doesn’t get any better than this, folks,” and “Stay happy,” he will be remembered for his enduring faith and as an example of the scripture, “Even though our outer person is being destroyed, our inner person is being renewed day by day,” because he was grateful and loving until his last breath.

He is survived by Elsa (Seaford, Delaware), whom he loved every day of his life, and his daughters Diane Vasconcellos (Murrieta, California), Brenda Kingree (Seaford, Delaware), Susan Shuler (Broomfield, Colorado), and Heather Austring (Playa del Carmen, Mexico).  He was predeceased by his parents and son Douglas Lundblad (Dover, Delaware).  He is also survived by nine grandchildren and eight great-grandchildren who all loved him dearly.

In lieu of flowers, the family recommends taking time to cherish and be with loved ones.  Due to COVID-19 precautions, funeral services and burial at the Delaware Veterans Memorial Cemetery in Millsboro, Delaware, will be private.

Plant a tree in memory of HARRY by clicking here.
To send flowers to HARRY's family, please visit our floral store.

Plant a tree in memory of HARRY
An environmentally-friendly option

Plant a tree in memory of HARRY

5 trees planted in memory of HARRY

There are 30 photos available in the gallery

Harry was always happy & friendly.  He would stop and talk to you anytime, one time he hugged me so tight I thought my ribs would break! And he dearly loved his wife too!

Harry was a tremendously vibrant person. He was a joy to talk with and always left you with a smile. A wonderful guy. Thank you, Harry.

My sincere condolences to the family and friends of Mr. Lundblad.  What an honor and pleasure to be acquainted with this joyful man over multiple decades.   As a much younger man  I respected and treasured his kindness and concern in the times we shared.

To the Lundblad family: I am SO grateful that I was able to share a meal with Elsa and Harry not too long ago. It was a wonderful visit and full of laughter! Praying for all of you!! ❤️

Sorry for your loss, Susan and Brenda...though I only met him a couple of times when you lived in Woodside Manor, I know he was a good man, husband, and father.  His was a life well lived.  I’m also sorry to hear about Doug. Lots of people in Seaford remember your family, and I know your parents moved back to Seaford. I’ll keep your mother in my thoughts and prayers.

Plant a tree in memory of HARRY